I take a lot of images of cells fluorescently stained via immunocytochemistry. I submitted this one for an “Images fighting cancer” competition, with the winners being chosen to be printed and displayed at Hilman Cancer Center. Mine was one of the images chosen!

These are cells derived from human DCIS (early stage breast cancer) stained for cytokeratins 8 and 14. 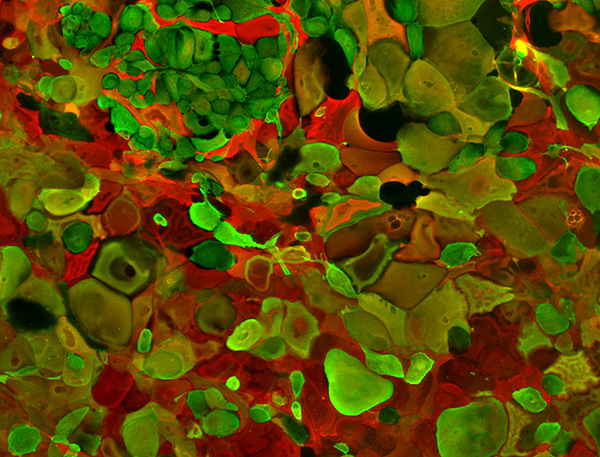 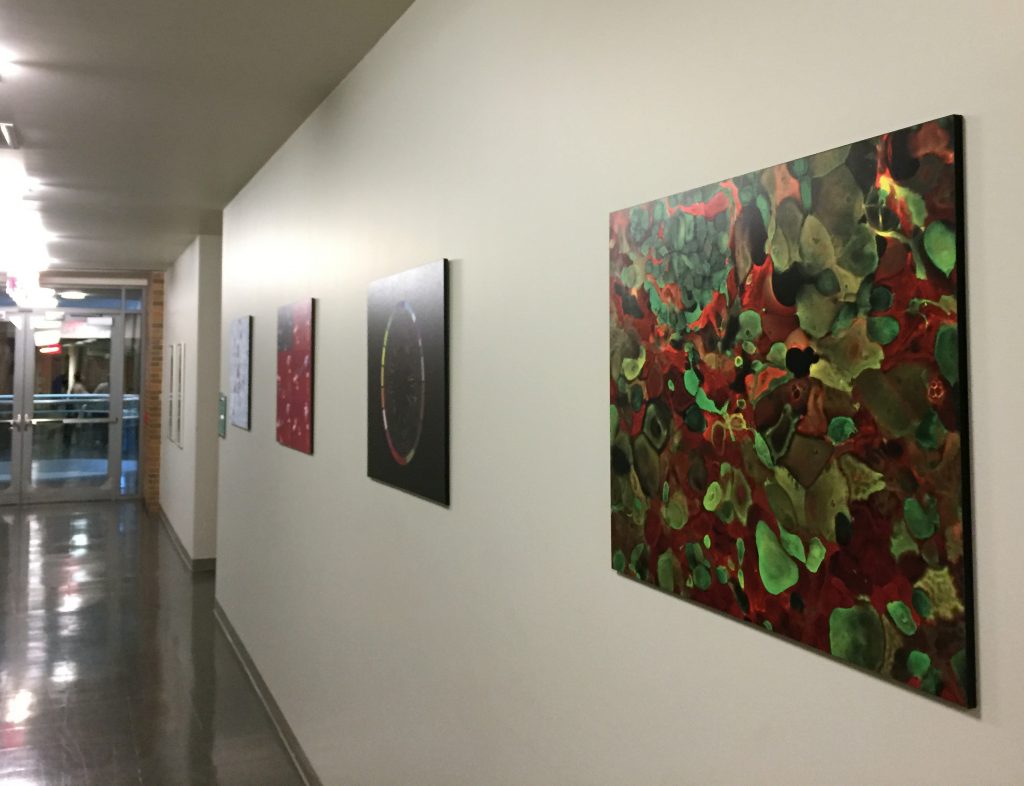 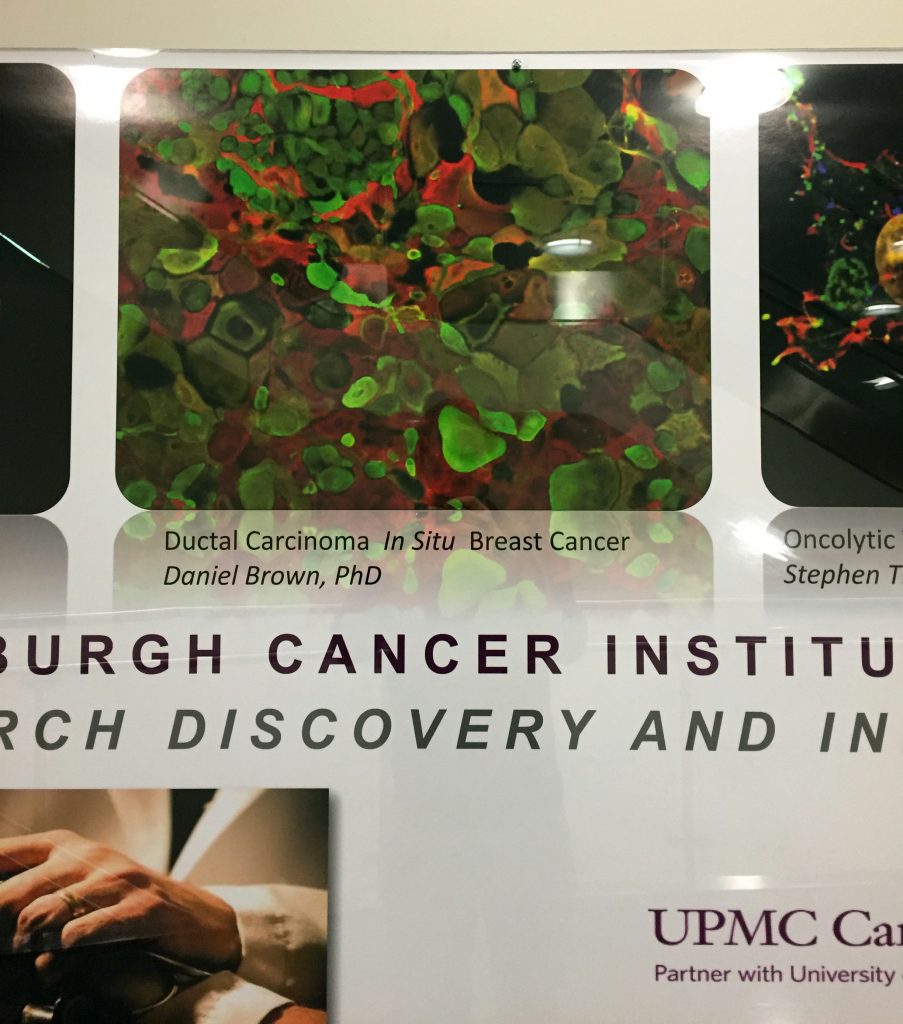 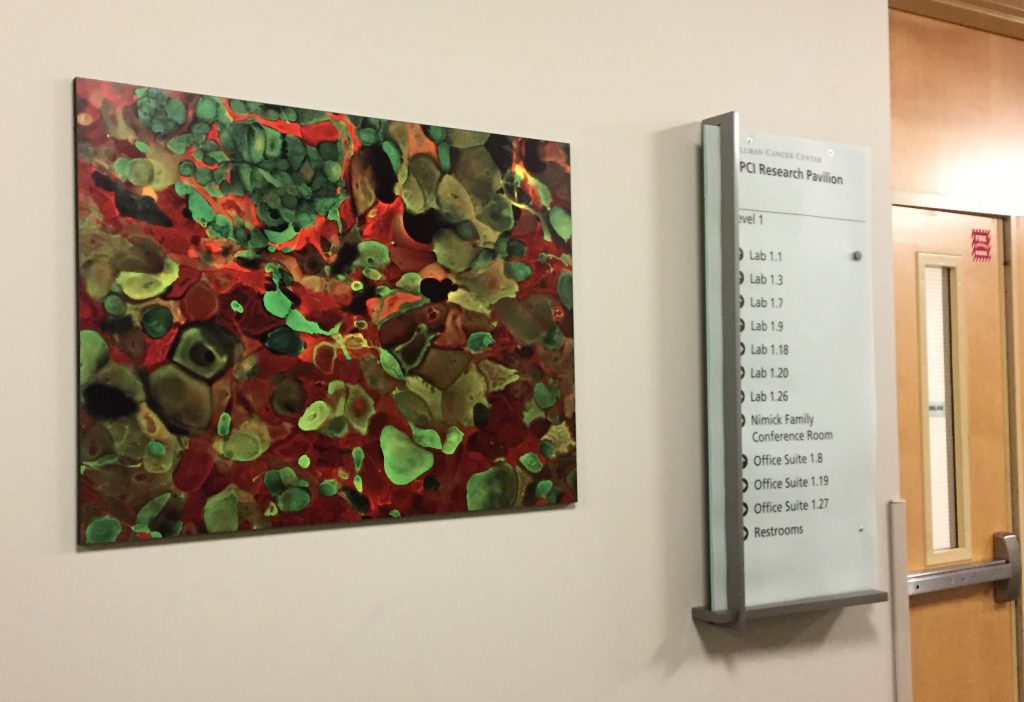 Lucky me! Two of my works, “Longing” and “I Hear You Have Crabs,” have been accepted into the “Wild Things Public Art Installation & Exhibition” juried by Cynthia Shaffer at Sweetwater Center for the Arts in Sewickley, Pennsylvania. I feel incredibly honored to have been selected! 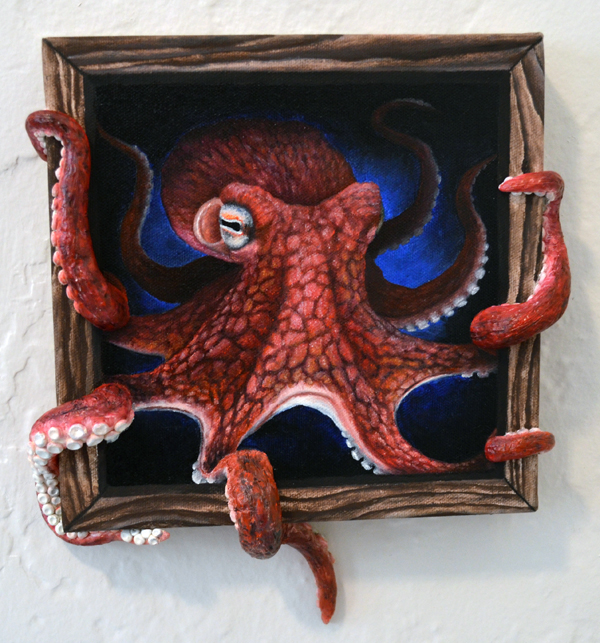 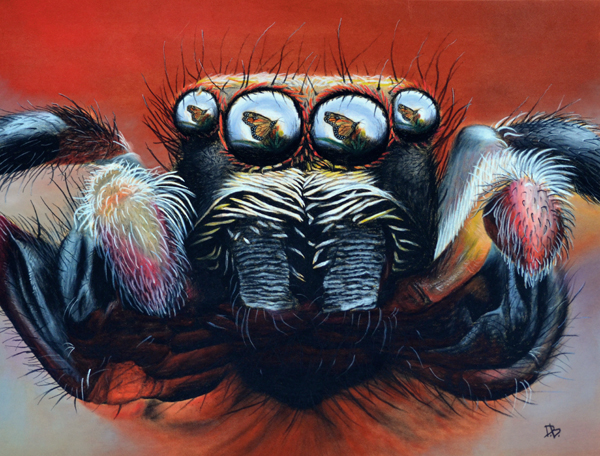 Recently one of my digital artworks, “Ocean Invasion #12: We’ve Got Crabs!” was accepted into the juried exhibit “In the Belly of the Beast” at the Sweetwater Center for the Arts in Sewickley, Pennsylvania. This past weekend was the opening reception, which was quite an exciting event for me, especially being my first such experience. I had no idea what to expect. Hell, I didn’t even know if their were general rules for what to wear (luckily there were not).

NOTE: This exhibit will be hanging at Sweetwater Center for the Arts through July 28th, 2012. So go check it out if you get the chance.

“In the Belly of the Beast

The raw force of nature unleashed. The soul of a beast exposed. The sheer power of entities not made by man that humble humanity into feeling small. This exhibit will reveal the essence of the organic: plants, animals, water, earth, sky, fire. Not in the safe, controllable way people see them, but instead showing the dynamic strength and ungovernable temperament that they truly possess. Selected art will focus on Mother Earth in an unaccustomed way. Work may also express the contradiction of what is man-made versus wild.

This exhibition is juried by Cynthia Shaffer, who built her art career in New York, Chicago and Phoenix before moving to Pittsburgh in 1990. She currently divides her time between henna tattooing, teaching art, taking photographs of animals at the Butler County Humane Society, volunteering at the ARL Wildlife Center, and working on her own art. Using bones, dead bugs, stones, feathers and other natural elements, Shaffer creates intricate patterns and mandala designs that juxtapose these components. Her objective is to show the beauty in things most people find repellent. “The color of a Japanese beetle is more exquisite than I can paint. The curve of a pelvic bone is more graceful than I can design. It fascinates me.”

The opening reception of In the Belly of the Beast will be attended by Pennsylvania creatures saved by the Animal Rescue League Wildlife Rehabilitation Center, with photographs and information about their organization.”

I was also incredibly lucky to have my wife and several friends there to show support (and observe the other art and eat the shrimp and meatballs and ogle the porcupine and turtle).

An interesting side note: the building featured in my artwork (with the crabs scurrying up it) is actually the apartment building in which several friends live.

Another cool aspect of the exhibit mentioned above was the fact that the Animal Rescue League was there, along with some of their rescues, including a porcupine and Eastern Box Turtles! 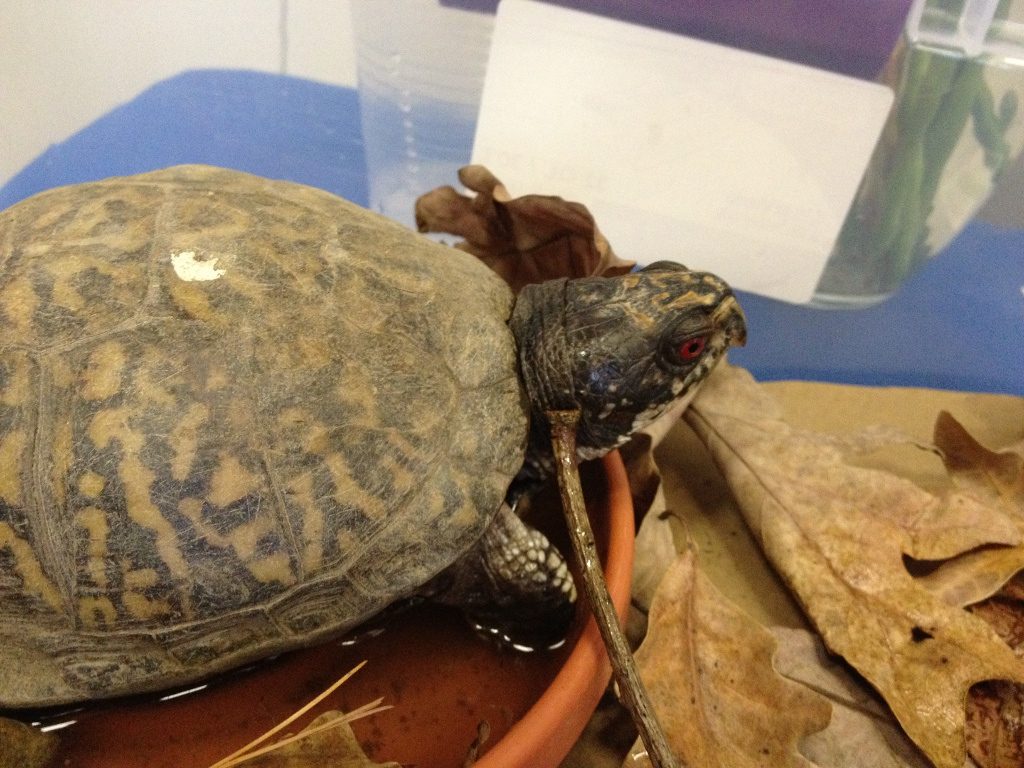 All in all it was a wonderful experience, and I hope to do it again soon.

I owe a great debt of gratitude to Glendon Mellow, the excellent science artist, blogger at The Flying Trilobyte, and writer at the Scientific American science-art blog “Symbiartic“.

In his latest post at Symbiartic, he featured my recent work “Ocean Invasion #12: We’ve Got Crabs.” 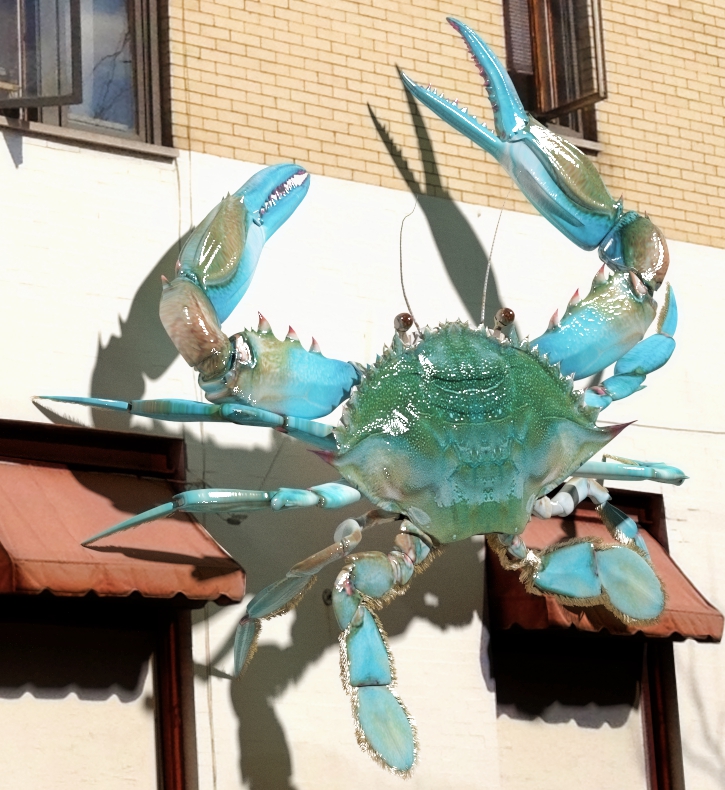 So check it out, and check out Glendon’s work as well.

My older work “Echinodermata,” which depicts the branches of the echinoderm lineage with a cladogram in the sand, was recently used in an excellent post: Veins of Water: The Evolution of the Echinoderm Water-Vascular System, by Kevin Zelnio at Deep Sea News. 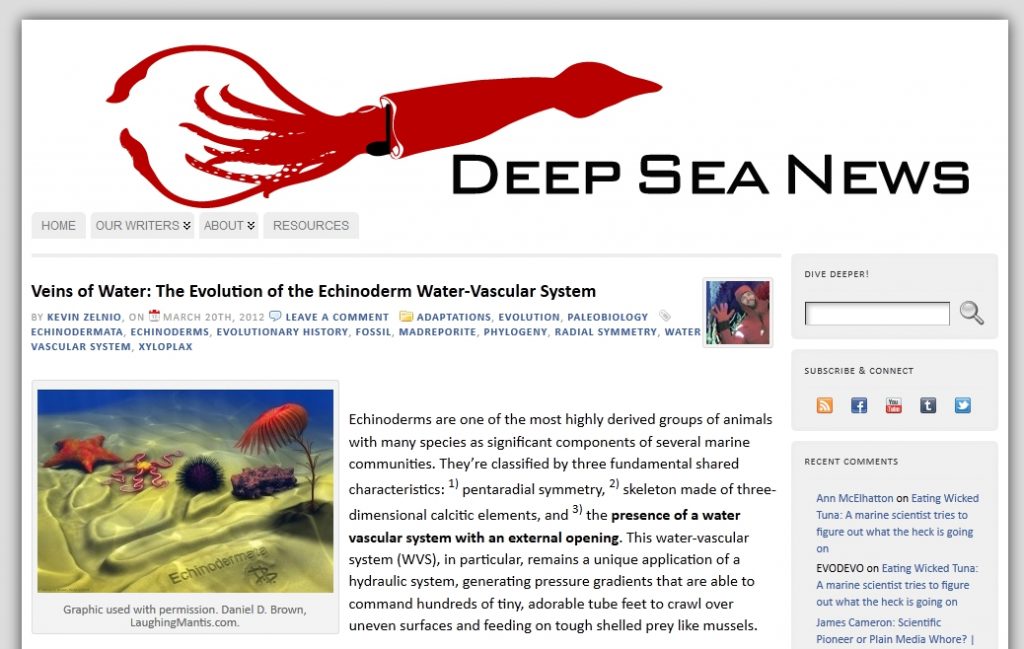 This work was also used as a backdrop in an interview with Dr. Christopher Mah (of the Smithsonian’s National Museum of Natural History and the Echinoblog).